Diversity is more than gender

Last Friday I attended Generate conference in London, where I had the pleasure of being introduced to a lovely guy – Benjamin Hollway. Ben is a developer, is currently interning at a Brighton agency, and was recently shortlisted for a net magazine award. He’s also 16.

I was never a 16 year old in the ‘industry’, because I was busy being a 16 year old listening to music in my bedroom whilst creating rather introspective personal sites with terrible graphics. I don’t think I even realised that conferences were a thing for many years later – it was several years into my professional life that I got to go to my first one. Ben, in contrast to my younger self, is extremely proactive, motivated, and is already doing great things. He’s exactly the kind of person that we need in the industry.

The week before last I met Sara Soueidan whilst speaking at From the Front. Sara lives in Lebanon, is also a developer, and will undoubtedly be shortlisted for a net magazine next time around. She’s older than 16 (not by much ;) ), but is also exactly the kind of person that we need in the industry.

We’ve talked a lot recently about the exclusion of, and the problems that women within the tech industry face, but Benjamin and Sara also face a shared problem that is nothing to do with gender – being different at events that focus on pushing a single experience.

The reality of after-parties

On Friday, myself, Benjamin and another Generate attendee walked to the after-party a short trip away from the actual venue. At the time I remember remarking to Ben that there were clearly two bars at the venue itself, and wasn’t sure why these hadn’t been used. On arriving at the after-party, we queued, Ben was asked for ID that he didn’t have, and so was asked for his age, to which he replied truthfully. We got pulled out of the queue, and a manager was called. I asked if they served food, I told a slight lie that he was specially invited because of the award, I offered to be an official chaperone and would vouch for him not drinking, but the fact was that we were trying to get into a basement nightclub and we all know how that goes. Throughout this, Ben was noticeably resigned to his fate – he’d clearly been in this position before and wasn’t even trying to game the system. The bouncers were very apologetic, but it wasn’t their fault – licensing laws are licensing laws – the problem was the choice of the venue itself. Ben went home, I went in, but found the atmosphere so oppressive and hard to actually talk that I left within the hour. Ben, I’m sorry. I should have offered to go elsewhere with you instead.

And this is the problem – segregation. I’d spent almost all of the day with Ben and catching up with someone I haven’t seen for a long time, and my intention for the after party was to say hi to a few more people once the sessions were over. I met a couple of nice people, but having a conversation via shouting isn’t my idea of fun, hence leaving. I could have gone with Ben, and maybe tried to recruit others, but that would be asking them to turn their back on the official party and people they potentially wanted to talk to, or the free drinks that they wanted (which isn’t in itself a bad thing to want). This isn’t a Generate-specific criticism, and I want to state that I thoroughly enjoyed the day itself. It’s actually a common pattern – conferences often have very similar venues and activities, which can unintentionally segregate the audience after all of the care put in to plan the main event.

When I read Ben’s post, I couldn’t help but think back to the considerable care that the From the Front team took for Sara. Sara is Muslim, and not only does not drink, but cannot have alcohol on the table full stop. She also has dietary requirements and other needs that aren’t simply preference – as with Benjamin they are part of who she is as a person. Apparently she does not typically attend speakers dinners, so it was lovely that she felt welcome enough to attend ours on the first night in Bologna. I was speaking the next day and was happy to forego alcohol, along with ‘old man’ Stu Robson who allegedly can’t handle it nowadays (hmm), so we had our little “NO WINE HERE” sign on the table. The official after-party was held in a beautiful open-air courtyard with plenty of space and chairs – not something which would work in Britain, but which was a lovely change from the usual cramped, dark rooms. 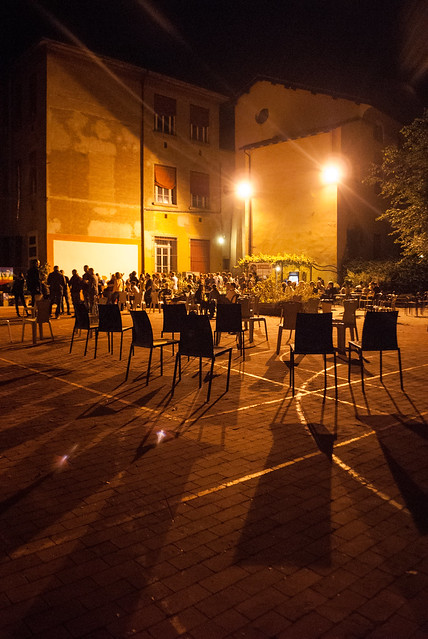 The courtyard where the FTF after-party was held

It wasn’t all easy though – sadly Sara didn’t feel that she could attend the second night’s dinner, and indeed there were two long tables – either Sara would have had to compromise her religion and her principles, or about 20 people would have had to have collectively decided to abstain. Neither is right.

Organising conferences is hard, and you will never be able to cater for everyone’s needs and create an experience that doesn’t require some element of compromise. Accessibility, dietary requirements, and individual needs can be tricky, and understandably need to be balanced with the availability of suitable venues, logistics, cost, and ticket sales – and a lot of people view a free bar as being a key perk of a conference. However, I’d like to ask event organisers to consider the bigger picture when it comes to events outside of the main sessions, and at least offer a broader experience, or opportunities for people to feel part of the ‘official’ experience and networking without having to conform to a single persona of conference attendee.

At any party there are those who want to be in the living room, dancing and chugging shots, those who want to be sneaking into the bedrooms and doing god knows what, and those who might be the dedicated driver or who’d simply rather be hanging out in the kitchen, having a chat. It’s a bit of a mess, but despite different intentions and enjoyment, everyone’s still part of the same experience due to a shared location and connection. When you’re planning meet ups, conference evening activities, or other industry events, consider that people aren’t all there to get drunk on free beer and shout at each other. Some may be, and that’s ok! But some may have kids with them, some may be under 18, some may have medical conditions meaning that they can’t stand up/hear well/access basements down stairs, some won’t want to be in the middle of nowhere trying to get home late at night, and some won’t want to be around alcohol. It doesn’t have to be one or the other. Your attendees may not be that diverse at the moment, but is that because that’s a true reflection of your audience, or because of the specifics of the event that you’ve organised? We’re trying not to be an industry of 20-something white men, so let’s not make it mandatory that you have to be over 18, and into clubbing and drinking to be part of the industry either.

As Ben said in his post, he also struggles with the cost of conferences, and that it can be difficult to ask for help or advice or opportunities. So instead, let’s ask for him, and for everyone else in that position. If you meet someone who is good at their job, or simply enthusiastic and willing to learn, then ask for them. Conference organisers – will you give Benjamin a ticket to your next event, or let him volunteer to work on your team? Will you let him speak? As a member of the industry, will you offer to teach him something he wants to learn, or introduce him to someone who could help him? Will you give him work and opportunities based on his talent, rather than his age? This doesn’t just go for Benjamin, it goes for every young or marginalised person in the industry. We are not all the same, and that is a great thing. Let’s have our events and our industry practices reflect that too.