Last week heralded my final speaking gig of the year, at From the Front, which took place in the beautiful city of Bologna in Italy.

I didn’t know too much about From the Front initially, although after reading up on it I was very excited by the concept. Naturally the first thing that jumped out at me was that the theme is based around a classic film every year, with this year’s being Indiana Jones and the Temple of DOM (badum tsh!). Another thing that stood out was the quality of the previous speakers, as well as how helpful and open the team tried to be. Right from the start they were clear about how they were selecting their speakers, publishing a great blog post on the subject. They also were very open about what they could and couldn’t afford to pay, which made it easy to decide whether I could afford to be involved or not. I hadn’t been to Italy since I was a kid, and decided that this was an opportunity that was just too good to miss.

In the run-up, all of the FTF organisers were extremely helpful. There was a Basecamp project set up for speakers to discuss their topics, technical specs of the venue, and other important details… like hats and jackets.

This care for the speakers continued into the conference period, with lots of little details like Marco (one of the organisers) himself picking me up from the airport, lots of attention to any individual needs the speakers had, and two brilliant dinners at restaurants they had carefully selected, which both gave us some great memories and stretched stomachs! The first night was at Trattoria di Via Serra. We had mushroom on bread/meat/prosciutto & cheese, spaghetti with spinach and tomato, pasta stuffed with goats cheese, prosciutto/meat/cheese/flatbread platter, meat/potatoes/vegetables, chocolate tart with ice cream. The second night was at Osteria Broccaindosso, and brought a never-ending stream of antipasti, a Bolognese lasagna, tortellini, a vegetarian eggplant lasagna, and then about 15 desserts including token grapes and limoncello. Apart from that we ate the best pizza I’ve ever had, one of which was so huge that it lived in my mini bar for two days as breakfast. The food, beer and wine in Bologna is amazing and I’m seriously considering going back to Italy later this year just to get a fix. Here’s some of the above:

The hotel was in a great location, just minutes away from the venue. Being on the roof terrace on the first day was stunning, but there were even better views to come once I had climbed up the 97m of the Asinelli Tower. 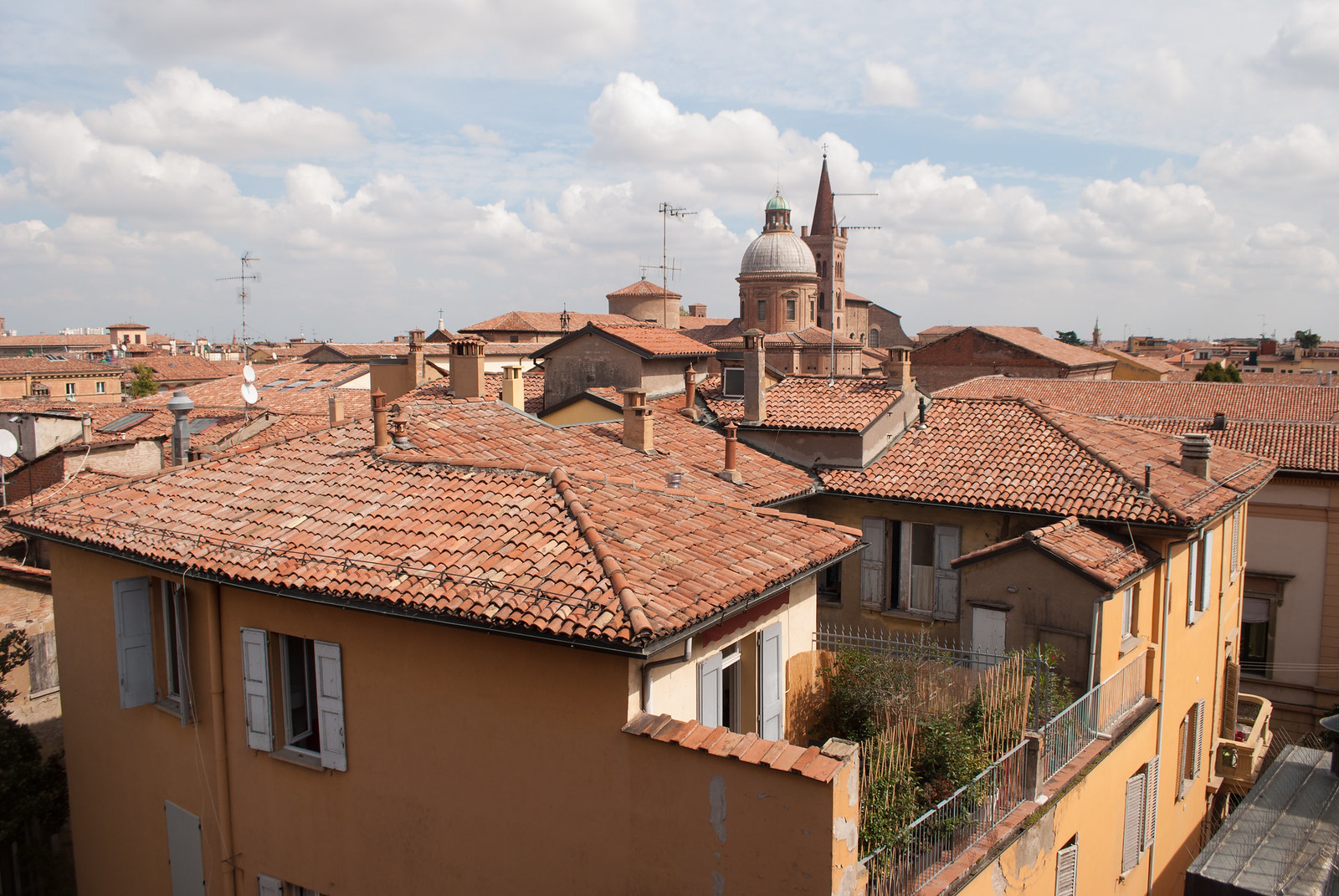 View from the roof of the Hotel Touring 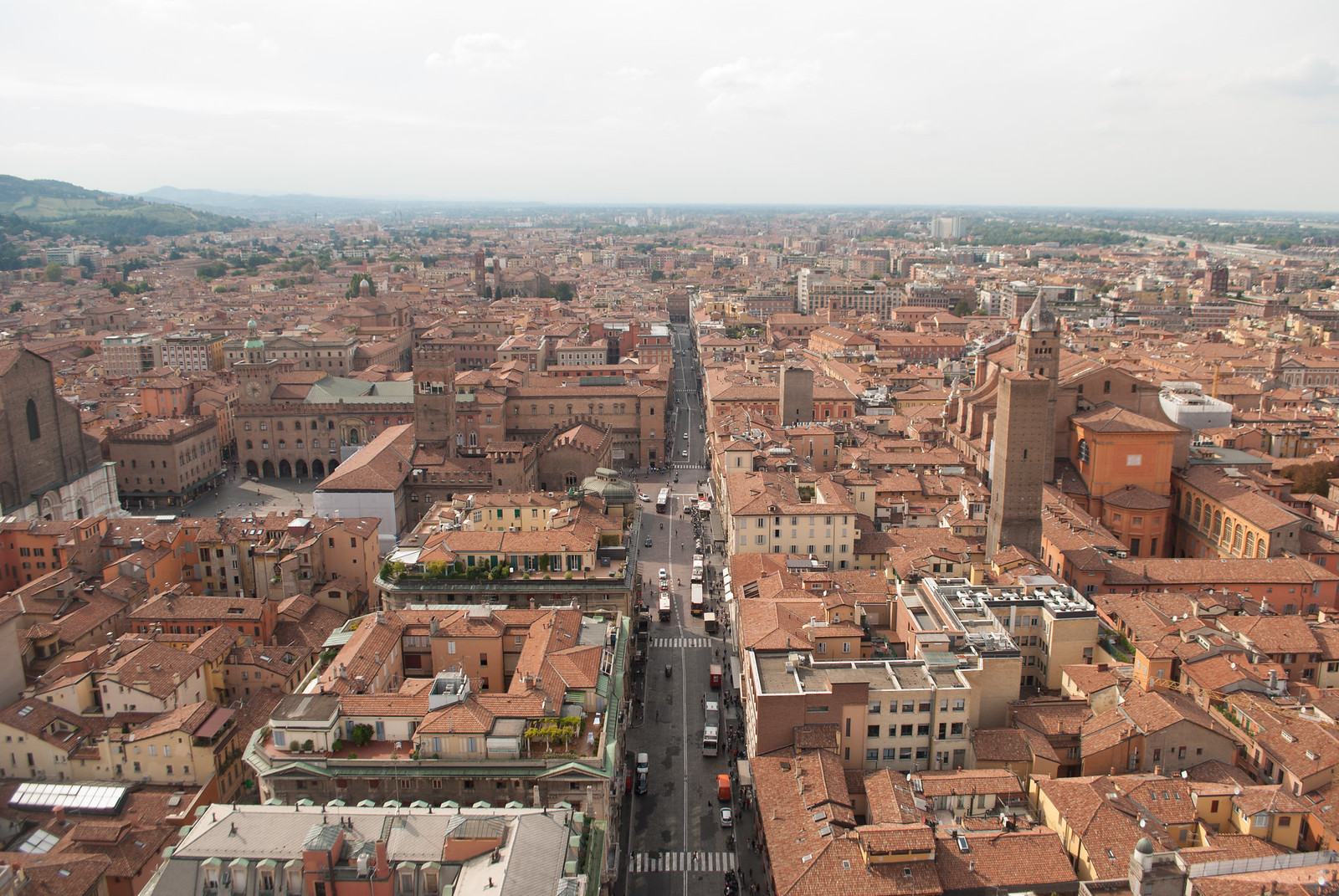 The conference (yes, I’m getting to that) was held in Teatro Duse, a 17th Century theatre in the centre of the city. This was a pretty special place to speak, and was a great conference venue – comfy chairs!

The conference itself was extremely well attended, and provided a live translation service for the 60% Italian audience should they desire it. Sessions over the two days were a mix between more general, high-level topics like mine, and nitty-gritty technical talks. I won’t go through all of the individual talks, because you’ll be able to watch them for yourselves once the videos are released, however personal highlights for me were Jeremy’s ‘Enhance’ (despite seeing some of it before), and Jon’s ‘A new architecture’. I get to see quite a lot of technical talks throughout the year, and I love it when instead I can listen to passionate speakers talk about the bigger picture and broader concepts – or if you will Ajax talks rather than Ajax talks, in honour of Jon’s unicorn-related rant. That’s not to say that the other talks weren’t brilliant though. I know how much effort and care everyone put into their sessions, and I’d like to thank everyone for taking the time to speak. I also learnt a huge amount from watching people like Jenn, Sara, and Owen, who I’d never seen before, but who each did things as speakers that I’ve made a mental note of. Slides are all being added to Lanyrd if you want to take a peek before the videos.

My talk was ‘With great power comes great (development) responsibility’, and I was happier with this variant than any of the other versions that I’d done (at the Digital Pond and Responsive Day Out 2), as I think it flowed better. I’ll post the video when I can, but until then my slides are on Slideshare (with 3,701 views at present!), and here are a couple of nice things that people said:

best talks from day 1 at #ftf14: @sjenkinson, pushing the boundaries while staying responsible and @adactio re-wiring some brains.

Favourite talk of #ftf14 so far was by @sjenkinson – a call for responsibility and empathy in the things we build.

I also got compared to Jen from the IT crowd, which will amuse a few of my ex-colleagues.

@sjenkinson you look like Jen Barber from IT Crowd #ftf14

I’m not good at making proper friends. I’m not even good at talking to people, depending on how I feel on any given day, so one of the absolute nicest things about From the Front was meeting so many genuinely interesting, lovely people, and feeling like I came away with a few new friends. Maybe it was the Italian love in the air, maybe it was the many repetitions of “un litro di vino bianco”, or maybe you lot were just awesome, but I already miss hanging out with my new pals. Sara, Estelle, Marco, Rocco, Chris, thank you so much for showing me around and being so lovely. Special thanks however go to my lunchtime pizza and wine chums Stu Robson and Jon Gold for being utterly brilliant human beings. Miss you guys.

So thank you, FTF team, for a brilliant conference. Thank you new friends. Thank you attendees for coming. Thank you everyone. It was amazing.

Back in time:
Speaking at The Digital Pond

Forward in time:
Diversity is more than gender