My life in vinyl

Earlier tonight, one of my fellow Colchestarians tweeted the following:

To which I replied “Splendid as in music, or as in artwork/vinyl itself as a beautiful entity?”. On receiving a response of “Ooh both”, I took this to mean that I should definitely sit in my kitchen at 11pm and start writing stories about selected pieces of my collection. Thanks for prompting me to write about things that I’ve wanted to capture in words for a while, Oli – this post is dedicated to YOU.

Warning: this post is image and nostalgia-heavy, and I haven’t just limited myself to LPs.

This all began at a weekend music festival, as many of my life’s tales do. There was a record fair, and I happened to stumble across a 7″ by one of my favourite bands – Ash. It was nothing special; a simple A/B side of Jesus Says and Taken Out, potentially from a jukebox (remember those, kids?). Despite the impracticalities of safely bringing home a bit of vinyl in a rucksack, on a coach into Victoria, and on a train back to Tunbridge Wells, it was done, and a lifetime of collecting commenced. 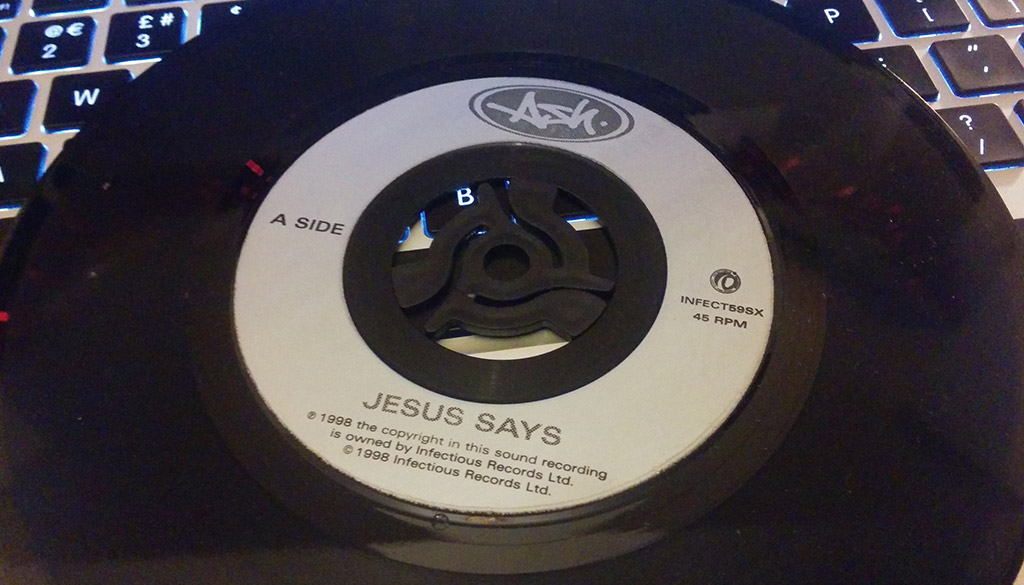 Luckily in those dark days before online shopping and having your own credit card we had places known as ‘shops’, where one could exchange paper-based currency for shiny discs. In my teenage years I lived in a place called Tunbridge Wells, which likes to think of itself as being a rather upmarket corner of the South East of England. One of my favourite places to go for many a year was the double whammy of Longplayer and Criminal Records, two music shops located just over the road from one another. I’d go in and religiously flick through the boxes of records whenever I went to town, hoping to unearth an unexpected gem.

Around this time, my dad was (is) living overseas, and his friend wanted to clear out some of the records that had been left in his care. I duly adopted them and gave them a home in my room to protect them from the cats. In a weekend reminiscent of scenes from High Fidelity, I went through every single one of almost 500 records, noting down the details and categorising them so that I’d know what I had. I still have the list, and it includes people like XTC, Vivaldi, The Police, Bowie, The Jam, Queen, Sex Pistols, and Springsteen. A good haul.

The collection started to grow, and as it did I wanted to display my most special records. Thanks to one of my local shops, I was able to buy a 7″ and 12″ plastic display strip so that I could hang my vinyl on my wall. I thought I was immensely cool. By 2004, my room looked like this: 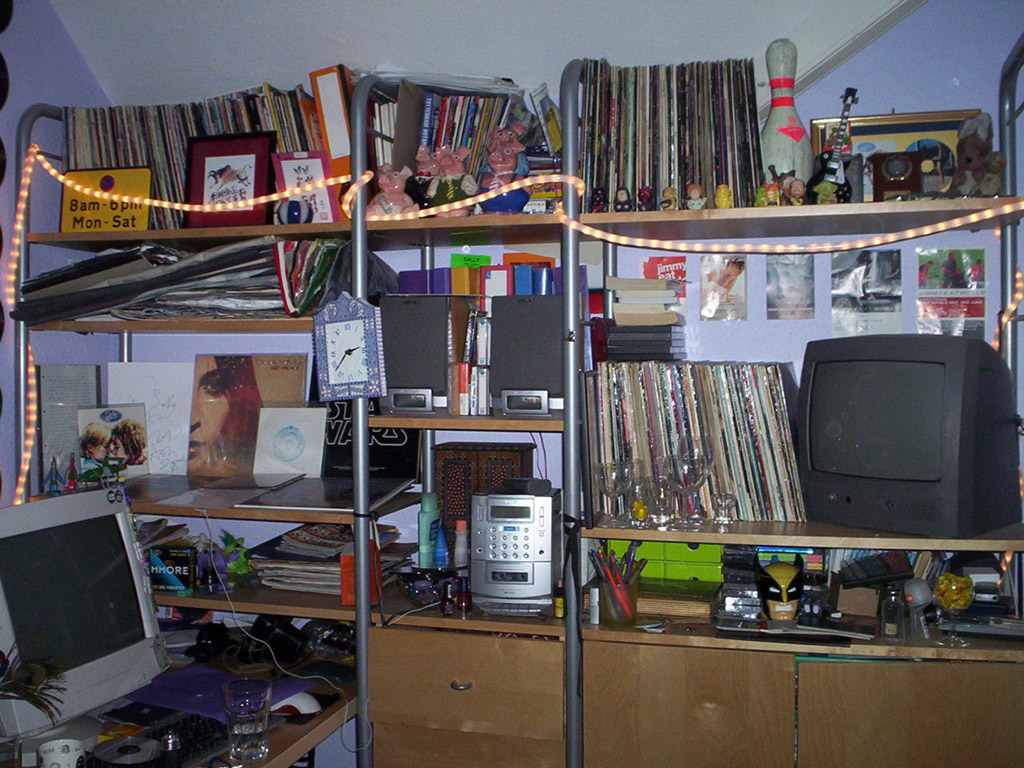 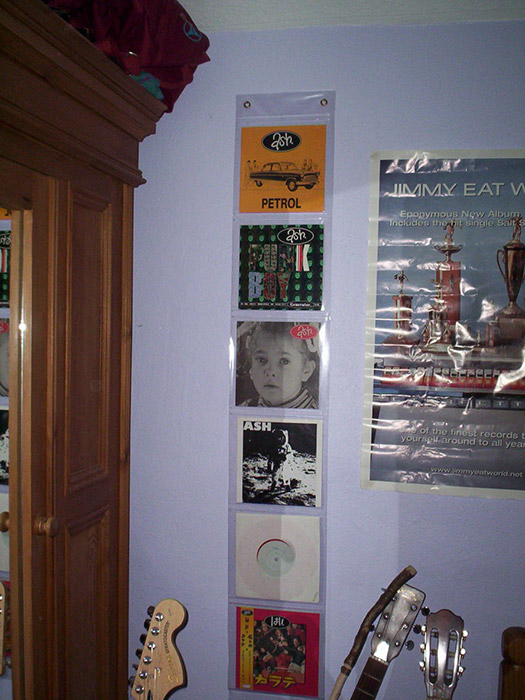 It was music everywhere – from the guitars to the stolen gig posters to the old stereo and tape deck to framed original lyrics given to me by a friend in a band who ended up having some success. Artbooks, a collection of stolen wine glasses, and comic/geek toys hint at other vices.

At the very left of the top photo you’ll see the slight edge of a line of records that I’d crudely stuck to the wall (forgive me, vinyl gods). I continued this in a revamp later, when a rainbow of coloured vinyl featuring Supergrass, Hundred Reasons and more stretched across my ceiling. I’m a bit sad that I don’t appear to have a photo of this.

Most head off to university with a few key things in mind – stay local (washing, rescuing), and drink your entire student loan. I went as far away as possible without leaving the country (barring Scotland, let’s not go to extremes), and headed to Newcastle where I proceeded to spend as much time and loan as I could in the glorious world of Steel Wheels. Again, I’m sad that I don’t appear to have any photos of this wonderful creaky old building, as I’m sure I’d taken some along the way. At this point I was going a bit crazy, because by now the internet had hit, and eBay meant that imports and rarities were now easily within my grasp.

Nowadays I’ve tried to kerb my habit a bit, but still can’t resist releases by particular bands. And so to answer the original question. The following are some of my present day collection; all splendid in their own way. Here are some of their stories.

As it stands, this is the only 10″ record that I’ve ever bought. I got it from Music & Video Exchange in Camden. I was slap bang in the middle of a break-up and buying a beautiful powder blue, heavyweight, melancholy record seemed like it would help. I also remember buying some very emo, plus very shouty CDs on the same day. This is a pattern that would repeat throughout my life. 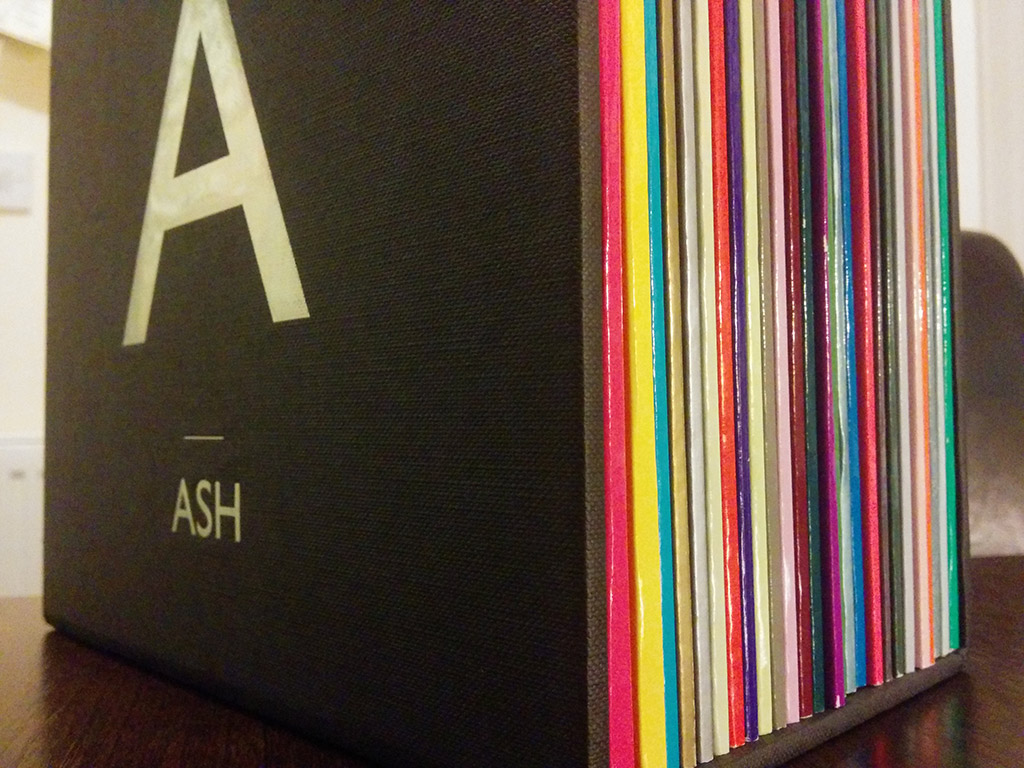 After Twilight of the Innocents, Ash announced that they were taking a break from conventional albums. The result was a collection of individual songs labelled A to Z, released over a period of around a year. It was like one of those ‘collect them all’ magazine deals, but much less rubbish. I loved the simplistic, typography-led design of the covers.

One of my favourite things is getting a new record and inspecting it for hidden quirks, and I absolutely love it when bands take the time to etch lyrics into the inner. This was the case with each of the A-Z records.

Signals Midwest – Light on the Lake

Signals Midwest are part of the Tiny Engines setup, and these guys do record releases right. For about £10 earlier this summer, I was able to buy an instant advance download of their latest album, and get my choice of limited edition heavyweight vinyl (picture above is limited to 125, ‘Sludge’ edition), a tshirt, stickers, and an art print. This picture doesn’t do the mottling justice, and what you can’t see is the embossing on the cover either. Really, really nicely put together.

These records to me probably sum up “splendid vinyl”. When I got them I thought they were the most beautiful thing I owned due to the combination of some amazing songs that sounded so good on vinyl, plus the cover art and records themselves. I have multiple copies in different colours. Each version is a double record with lyrics insert, on heavyweight, with one being a lovely grey mottled effect, and one being a translucent green. I got the grey one signed at an in-store because I’m a nerd. 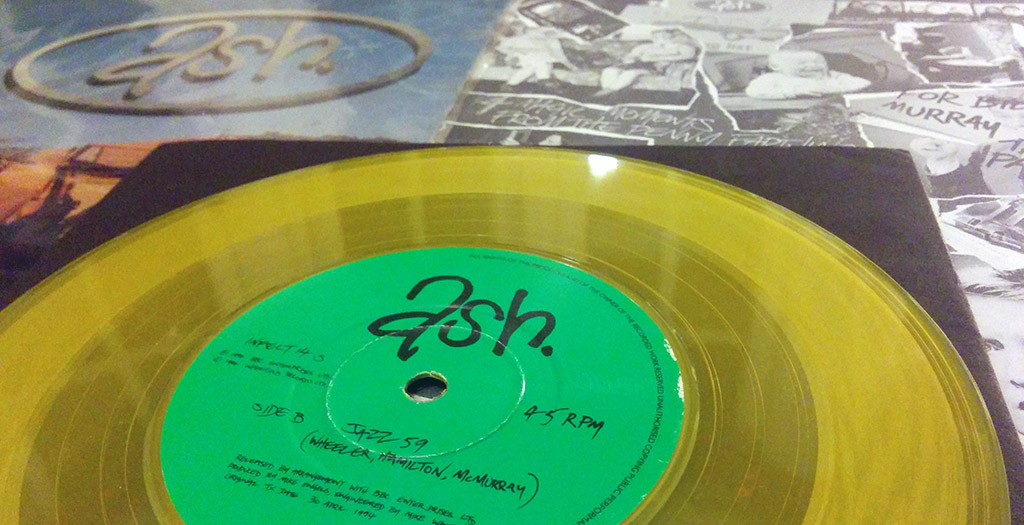 This is one of the few records that I can’t remember where it came from. I think it could possibly have been a present. The thing I really like about this, apart from the very cool shade of the 7″, was the concept of physical bonus tracks. This is something that I doubt we’ll ever see again, and it’s a real shame. Having something tangible as an extra is a really nice touch.

[Note: I have been reliably informed, in the pub, by my good friend Toby that there are recent releases by Sigur Ros (bonus 10″) and Superchunk (bonus 7″ white vinyl) that continue this trend. Glad to hear it.]

This one was part of Dad’s collection, and was one of the first to be grabbed out with excitement. In terms of “special vinyl”, I still find it hard to beat putting this on a turntable in a darkened room, and really listening to the intricacies of the composition.

Huey Lewis and the News – Sports

One of my friendship groups has a long-standing love affair with American Psycho. One of my friends, Mark, also has a long-standing love affair (non-sexual) with Huey Lewis. Mark gave me this record, I believe in Milton Keynes when we were meeting up once. To me it’s special because a) it’s a lovely thing to give a friend a record 2) it epitomises that there is some amazing music out there for very little money (ONE ENGLISH POUND), where you can buy a physical object that someone has put time and love into. And it’s sad, because a lot of people will never appreciate that. d) every time I look at it I get to picture Christian Bale in a raincoat.

You’re probably starting to get the picture – I have a lot of Ash stuff. These are some of my favourites, and include a Japanese import of Kung Fu, the ‘Barbie 7″‘, different coloured versions of Petrol/Punk Boy, some coloured promos, and others. Some, like the very common Goldfinger, are lovely – glittery gold in this case. After doing a lot of coloured vinyl during the NCS and 1977 eras, they moved on to lovely gatefold packaging with heavy card based around the music videos for singles from Free All Angels. These don’t fit very well in my record flight cases though, so minus points for lack of user-testing this scenario.

As with Ash, Jimmy Eat World are a long-standing favourite band, although I am currently pretending that multiple recent albums never happened. The singles I have for them are a lot less extensive, and stop at Work, which was pretty much the limit of what I could bear. Here are some of my older favourites, along with the ever comical Last Christmas/Firestarter release, which I subject myself to every festive period for the sake of memories. I first heard Last Christmas as part of a website reveal, patiently listening on my 56k dial-up connection, and laughed myself silly. The Jebediah split EP features No Sensitivity, one of my favourite Jimmy Eat World songs, and is one of the few cover songs that I’ve ever recorded myself playing and singing.

I absolutely loved this age of Fierce Panda comps. Not only did they feature some brilliant bands, but the records always contained those little extra details that gave them personality. The Squirrel EP for example, has on its reverse a local road map showing the UK town of Knutsford, with the caption “In the autumn of 2002 a grey squirrel went on the rampage, viciously assaulting six human beings. In Knutsford. Need we say more?”. The inner track listing has thoughts covering the choice of songs, but also musings including “As we type (Spurs have just gone 4-3 up against Everton, in case you were wondering)…”. Knowing Spurs, I’m going to assume that lead didn’t last. Thank you, Fierce Panda, for putting in the extra detail.

I could go on all night, but in this day of responsive sites and data considerations I should probably stop throwing huge images at your screen before I’ve put in a proper variable image solution. You’re also probably itching to dust off your turntable and revisit some of your own vinyl memories. No? Why the hell not? It’s now 2am? Oh…

I’ll leave you with this: in this age of 50,000,000 songs on an iPod, CDs being carted off to make more space in our homes for generic trinkets bought from chain stores, and kids growing up with rooms full of One Direction posters and iTunes vouchers, don’t lose sight of what makes things special. The music was amazing, and it will hopefully remain to be so, but it was the little touches that made things extra-special. Whether the excitement of a low number, a beautiful new coloured 7″, or a ‘secret’ etched message, as we move towards our entire person being assimilated into THE CLOUD, I hope we don’t completely lose the care and attention that has been put into vinyl over the years, or much less the stories and memories that go along with items like these.

Forward in time:
Mindmapping with Javascript