Every once in a while something comes along where you kick yourself for not thinking of it first. On a recent ski holiday to Austria I encountered one of these equally frustrating and brilliant instances.

The resort I was in, the ‘Skicircus’ of Saalbach, Hinterglemm and Leogang has recently introduced the Skiline system, essentially comprised of services which expose lift pass data to app and website interfaces. At the time of writing there is a ‘full’ site, a mobile site, and apps for Android and iOS. You create an account, then associate the ID of your lift passes to the account so you can access different trips from one place.

The Skiline website is less than ideal, with a number of bugs. These include a footer link to the Forum taking you to a qa. subdomain and a message that this is for testing purposes only, a jobs page which feels unfinished, styling that clearly needs work in areas, and inconsistencies in data rounding leading to stats being reported differently in different places. The app itself (Android only used) also seems to have some issues with updating, sometimes requiring multiple manual refreshes on different screens before data is displayed accurately. These are all things that I’m sure they’re working on. The concept, however, I absolutely love.

We’re all used to data being collected about us in everyday situations. Whether we like it or not is another matter. The idea of Skiline is one that turns the usual closed system on its head, and exposes information back to the consumer itself rather than keeping it behind closed doors for marketing, or analysis of customer traffic patterns for lift improvements, or whatever other wizardry the data analysts do with it…. if they even have data analysts? The most important thing about all of this for me was that the majority of the infrastructure was there already – digital lift gates by Skidata are the norm. Lift passes have to get scanned and checked for validity before gates will open, and that data gets logged. I know nothing about the type of back-end systems that are employed in these situations, however it’s a classic model – your data capture and storage are there, ready to be exposed. Putting in this exposure, and different interfaces on top can mean that not only can resort workers access the data more easily, but it can also be presented back to the people that created it in the first place, and in turn can potentially help drive data generation and interaction.

But data is just a load of boring numbers, right?

So what’s the benefit? I know I’m a bit of an extreme case. If there’s some data knocking around it’s likely I’ll be interested just because that’s the kind of thing that floats my boat, but what’s in it for the masses?

Skiline has clear intentions for the service to be an ongoing, community-focussed offering. There is an information side to it, in terms of weather and snow reports for resorts, however the driving factor for continued usage seems to be  competition. The usual profiles, badges, and friending has been introduced, as well as the concepts of ‘teams’ – great for group holidays. As well as competitions between individuals, online and resort-based competitions are also entered by using the service, with special competitions such as speed guns sponsored by BMW, or a Milka cup currently being held.

From the website: “It’s been shown that Skiline skiiers have a lot of fun with the exchange of Skiline profile information with their friends”. The core of the offering is a graph of your day, complete with the amount of kilometres skied downhill, the number of lifts, and more. This can be accessed through any of the sites/apps, as well as through kiosks in-resort where graphs can be printed (if you can find one with a working printer!). 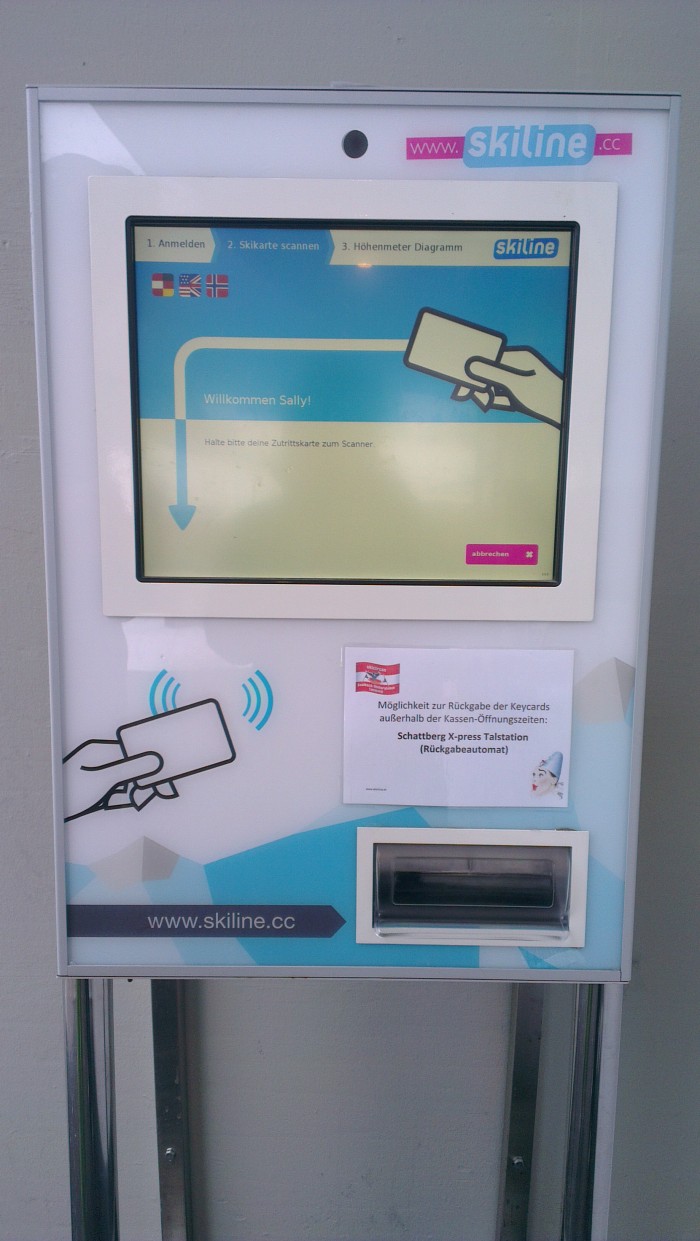 Skiline kiosk, located at the entrance to a lift, asking the user to tap their lift pass against the sensor. 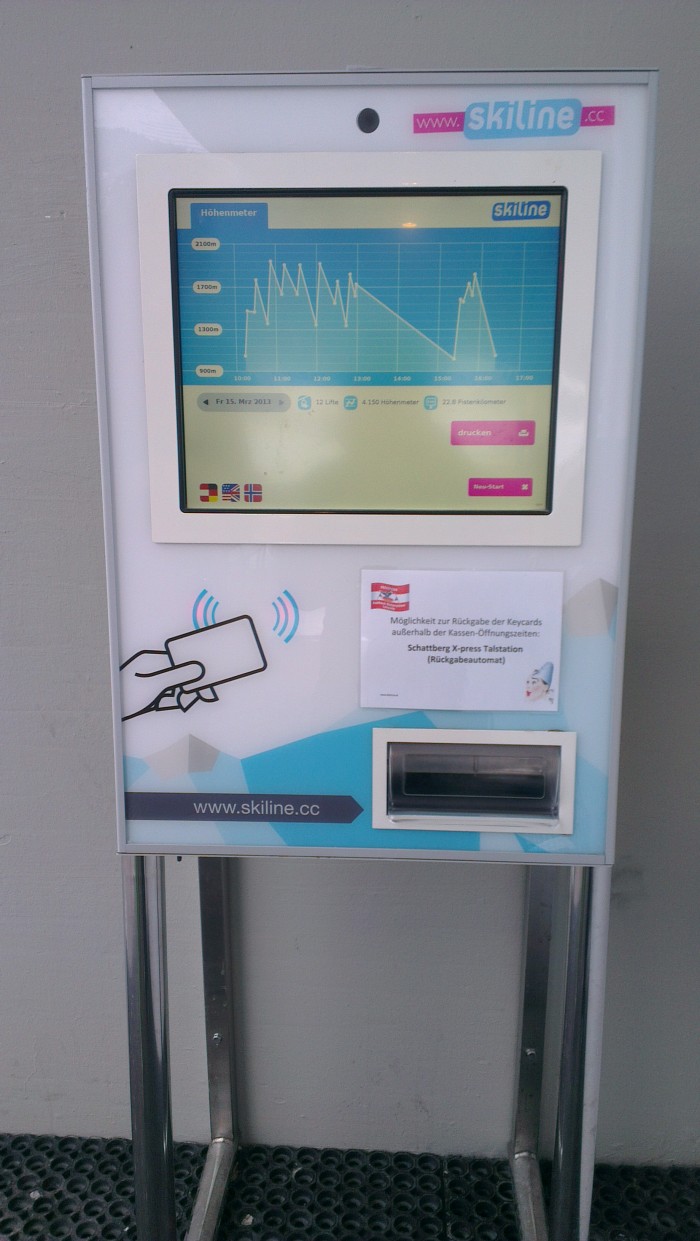 Social sharing and bragging rights have been invested in with additional features on the slopes:

“At Skiline, you shoot your own movie on the ski slopes. Skiline, along with its partners, has brought a further sensation to the market: Skiline Movies. The SkiMovie installation enables you to be filmed with an HD camera on your entire run through the passage of a turnstile in the entrance (with a ski pass) of a racing course or a Fun Park. The camera follows you to the end of the course and puts the film of the run online in the Skiline account belonging to the ski pass holder. You can view it on the internet or in the Skiline terminals in the skiing location, and you can make it public, delete it, put it on YouTube, add it to Facebook or send it to your friends via email. The best thing about this service is that it is available to any skiier and it costs nothing.”

As for me, Skiline became the first thing I checked whenever I hit a wifi hotspot, even before checking into my other data love of Foursquare. Seeing how far I had gone (or hadn’t gone on most days!) acted as a clear incentive to do more and more as the week went on, and it was genuinely very satisfying to set a target distance for the week and meet it. It also acted as a point of reference – lift journeys can be overlaid on a piste map in order to help remember which runs you’d done and which you’d missed.

Unfortunately for you all I wasn’t able to get any ski movies so you’ll have to be spared the comedy of me stacking it down a racing course… until next year.

Skiline isn’t without it’s flaws at present, but being able to get access to my data definitely added a different dimension to my trip. The system hasn’t been rolled out across all major resorts yet, and doesn’t feature any in the US, although I was very pleased to see my historical favourite small resort amongst the list of places which do already offer it. I would go so far as to say that having this kind of system in place would make me consider resorts that do offer it more favourably than resorts that don’t, so hopefully many more will sign up soon!

Back in time:
Switching to freelance